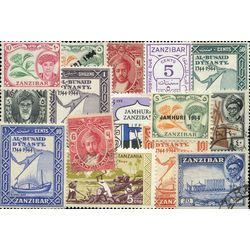 Zanzibar is an island off the coast of Africa in the Indian Ocean. Zanzibar has a long history of occupation by foreign powers. Very early on, it was in hands of the Portuguese, before eventually becoming a British protectorate in 1890. Independence from the British was obtained in 1963 and in 1964 the island joined with Tanganyika to form Tanzania. It is now a semi-autonomous region of Tanzania. Zanzibar is a poor country whose economy relies on the spice industry and tourism. Zanzibar has a postal history going back a century, stamps being issued by whoever held the area (the French, the Germans, the British, and so forth). Today, stamps are issued for the region by Tanzania.