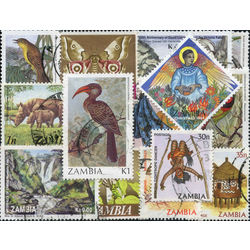 * The packets may contain some Northern Rhodesia.

Zambia is a landlocked country in southern Africa roughly located in between Angola and Malawi. Once known as Northern Rhodesia when it was a British protectorate, Zambia gained its independence in 1964. The country was long explored by different people and one of its most imposing geographical features was, and still is, Victoria Falls, part of which is located in Zambia. The capital city is Lusaka. The country depends greatly upon copper mining for its economy and it is still a producer of cellular phones. Zambia's postal history begins in 1964.