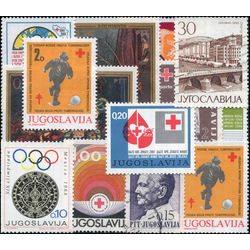 Yugoslavia, once spelled and called "Jugoslavia" is a country which no longer exists. The area had a complicated modern political history with the name Yugoslavia referring, at different parts of the late 20th and early 21st century to an area of changing borders. The last remnants of a nation called Yugoslavia came to a final end in 2006, with the last few states opting for independence. Modern Yugoslavia saw its beginning in 1918 after being proclaimed a country at the end of World War I by the treaty of Versailles. The first stamps began being issued for the Kingdom of Serbs in 1918, and then, for the Kingdom of Yugoslavia in 1921, and then reissued for every subsequent renaming of the country. The Scott catalogue of postal stamps ends the countries' postal history in 1992. In those years, Yugoslavia and neighbouring countries took a definite turn for the worse, with civil war breaking out between different ethnic factions, which led to a well-publicized genocide of certain ethinic minorities. Postal history at this time became too difficult to track.