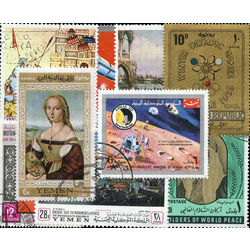 Yemen is a country located on the southern end of the Arabian Peninsula. This country has an ancient history and its postal history goes back to the Ottoman empire. After the Ottomans left, Yemen issued its first postage stamps in 1926 and joined the Universal Postal Union in 1930. In these days, Yemen was under British control, but after a brief stint with communism, the country officially became known as the Republic of Yemen in1990. Its modern postal history begins at that point. Yemen is a poor country since it does not have much oil and because of the demands of a high population. An estimated 23 million people live in this country which measures less than 500,000 square kilometres (compared to Canada, with a population of 34 million for an area measuring almost 10 000 000 sq/km).