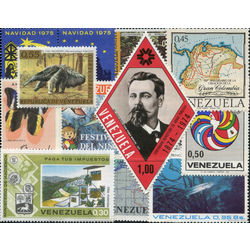 Venezuela is located on the coast of northern South America. It includes the continental region as well as many islands in the Caribbean Sea. The culture of the area has been heavily influenced by the Spanish and Africans as well as the indigenous tribes. Venezuela was once a Spanish colony but became independent in 1821. Early on, the region was named "little Venice" by an explorer after observing stilt houses built over a lake. The first stamps of Venezuela were issued in 1859.