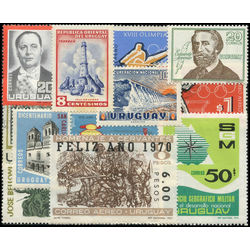 Uruguay is a country in southeastern South America which borders Brazil. Mainy an agricultural society for centuries, the Spanish attempted to colonize the area in the 16th century, but met with fierce resistance from the indigenous population. Today, most of Uruguay's population is of European descent. This is probably due to the fact that the British, Spanish and Portuguese fought over control of the area in the 19th century. Uruguay is known for its rich cultural history and contributions to the artistic world in painting, dance and music. The postal history of Uruguay begins in 1856.