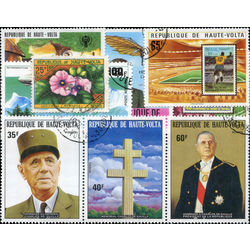 Upper Volta once referred to the country in western Africa which contained the upper portion of the Volta River, and which is now known as Burkina Faso. Once a self-governing French colony, it gained full independence from the French in 1960. The postal history of Upper Volta begins in 1959 and goes up to 1984, the year that the name of the country was changed.