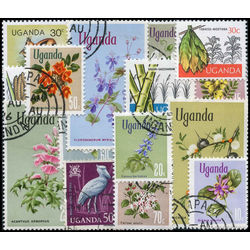 Uganda is a country is eastern Africa near Kenya. This history of Uganda, like all African countries, is an indigenous one going back centuries. It was ruled by many different tribal kingdoms. Also, like many African countries, its modern history is marked by colonialism. Uganda became a protectorate of Great Britain in the 1800's, but gained its independence in 1962. That is the same year that it began issuing its own stamps. Uganda is probably most known for the murderous reign of Idi Amin.