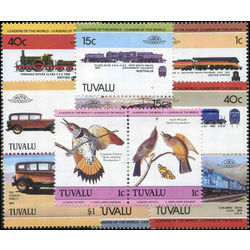 Tuvalu is a Polynesian archipelago in the Pacific Ocean located between Hawaii and Australia. Once known as the Ellice Islands, the area was under the rule of Great Britain starting in the late 19th century. Tuvalu gained its independence in 1978. As an island nation, its economy obviously depends on fishing and also farming. It also relies on financial assitance from foreign countries. The sale of stamps forms an important part of the economy. The first stamp of Tuvalu was issued in 1976. These stamps are often commemorative issues featuring fishing, corals and island life.