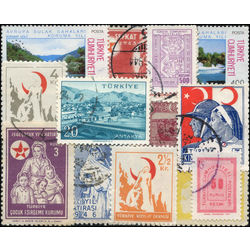 Turkey is a country located between the Mediterranean Sea and the Black Sea and bordering Syria, Iraq and Iran. Modern Turkey was established as an independent republic in 1959. It is a vibrant country with an ancient culture going back to the Ottoman Empire. Turkey is becoming a popular tourist destination and is known for the city of Istanbul, its cuisine, coffee and Grand Bazaar. The postal history of Turkey begins with the issuing of its first stamp in 1863. Turkey was also a founding member of the organization which would become known as the Universal Postal Union.