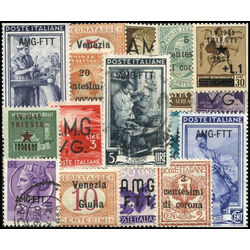 Trieste is a city in northern Italy near the border of Slovenia. Its location at one of the crossroads of Europe has made it a melting pot of different customs, cuisines and peoples. It was an important port city in the heyday of the Austro-Hungarian Empire. The political history of Trieste is slightly complicated, with different areas and zones falling under the authority of different governments during World War II. Finally, in 1954, the whole of Trieste became a part of Italy. The city is a popular and exciting tourist destination where you can get a taste of Italy and of Slavic Europe. Trieste is known for its coffee, being the producer of "Illy Caffé". The postal history of Trieste begins in 1947, under the authority of the different occupying nations.