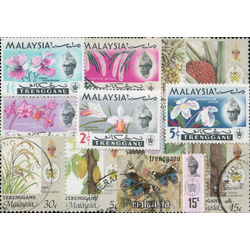 Trengganu is a country in north-eastern Malaysia which also comprises several islands. Trengganu was under Siamese rule until 1909, the year when ruling authority was given to Great Britain. Trengganu became a state of independent Malaya in 1957. The economy of this country is now largely dependant on oil and gas. Home to an elephant sanctuary, turtle sanctuaries, firefly sanctuary (!) and the largest man-made lake in the world, Trengganu is a delight to nature lovers. The postal history of Trengganu begins in 1910.