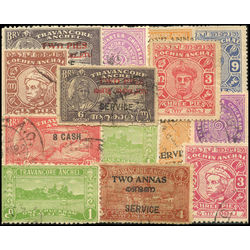 Travancore - Cochin is a former princely state of India located in southeastern India now called Kerala. It was formed in 1949 when the two states of Travancore and Cochin united to form one state. In comparison with other areas of India, this state is considered to have had many enlightened policies and modern ideas. The rulers of Travancore-Cochin were very tolerant of other religions and cultures; women had more rights than usual at the time. They could inherit property, be educated and even divorce their husbands. The Rajas of Travancore-Cochin were loved for their fairness and for their use of state funds for state affairs, and not just to line their own pockets. The postal history of the united Travancore - Cochin dates from 1949-1951, until it became known as Kerala.