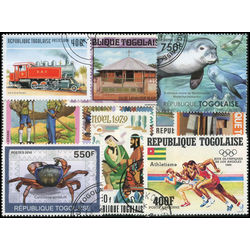 Togo is a tall, narrow shaped, west African country located between Ghana and Benin. This country was once under British, French and German occupation, but gained independance in 1960. Togo's population mainly relies on agriculture for survival and many of its inhabitants live below the international poverty line. The postal history of Togo began in 1957.