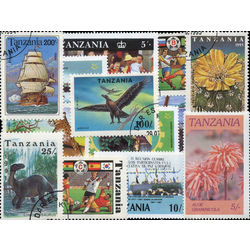 Tanzania is an east African country located near Kenya with a border on the Indian Ocean. This country occupies a region which was once known as Tanganyika and Zanzibar respectively. These two states joined in 1964 to form the nation of Tanzania as we know it. The first stamps of this union were issued in that same year. Togo is known for its wildlife and as the home of Mount Kilimanjaro, Africa's highest mountain.