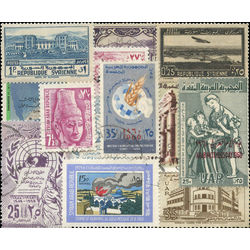 Syria is a country in Asia Minor which borders Lebanon, Turkey and Israel. It was once part of the Ottoman Empire, but after the latter's dissolution, Syria became a kingdom in 1920. This only lasted three years; in 1923 Syria was placed under the control of France. Modern Syria obtained full independence in 1946. However, the country's political history has been and still is turbulent. Under the control of different ruling nations there has long existed a postal service in the area, but the first stamps of Syria were issued in 1919.