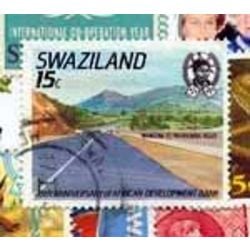 Swaziland is a small, landlocked country at the southern end of Africa bordered by South Africa and Mozambique. Once a British protectorate, Swaziland gained full independence in 1968. It's geography showcases mountains, savannahs (wide grasslands) and rainforests. One of Swaziland's claims to fame is the fact that it is considered 99% free of political violence. The postal history of Swaziland begins in 1899.