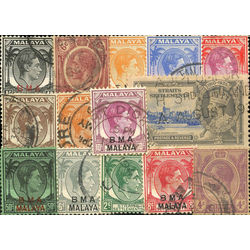 The Straits Settlements were once a group of British territories which consisted of Malacca, Penang, and Singapore.The Settlements came under direct British control from 1867-1946 and were used as trade centers. These settlements, except for the independent country of Singapore, are now a part of Malaysia. The Settlements began issuing their own stamps in 1867, even though a mail service had been in use since the beginning of the 1800s.