👑 Welcoming His Majesty King Charles III! 👑
CLICK HERE to SAVE with our COUPON!
Use coupon CharlesIII* to save 5% on any order!
*Enter this code during checkout, valid through 2022/09/30.
FREE SHIPPING
available at $89
World Stamps & Collections /
World Stamp Packets /
Countries in S
Back 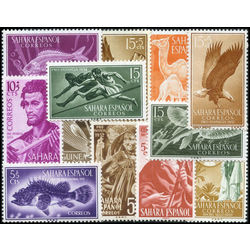 The area known as Spanish Sahara was located on the coast of the Atlantic Ocean bordering Morocco and Mauritania. It was one of the last areas under Spanish control leftover from its colonial days. However, Spain's hold over the area was long in dispute and it finally had to hand the region over to Morocco and Mauritania in 1975. Today, various factions continue to fight over who legally has claim to this part of the globe. The postal history of Spanish Sahara dates from 1924-1975.