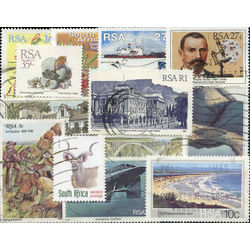 South Africa is located at the southern end of the African continent. As well as having a coastline on the Indian Ocean, it is bordered by Botswana and Mozambique. The country is probably best known for its long fight against apartheid, led by humanitarian leader Nelson Mandela, who became President of the Republic from 1994-1999. A culturally diverse country, South Africa has even been called a Rainbow Nation. The countryside is beautiful with many species of flora and fauna to be found. A visit to South Africa would not be complete without getting a taste of its music and dance, ancient rock paintings and 'braai', or barbecue as we call it. The postal history of South Africa begins in 1910.