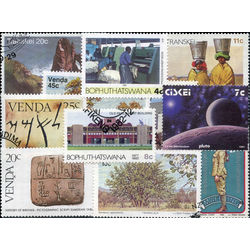 Within the “old” South Africa, 10 homelands/bantustans were created, four of which were granted “independence” by South Africa (not recognized by any other country in the world). Bophuthatswana, Ciskei, Transkei and Venda were the four so-called “independent” homelands having been granted independence in 1977. All the former South African homelands ceased to exist as political entities on 27 April 1994. They have all been reincorporated into South Africa.