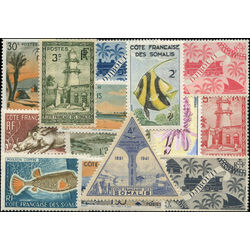 The small area named Somali Coast was located on the north-eastern African continent near present-day Ethiopia and Eritrea. It was a French colony from 1896-1967. Stamps for the area began to be issued in 1902 and this continued until 1967, the year that the area changed names. Those stamps were inscribed 'Côte française des Somalis'. The area once considered 'French Somali Coast' is now part of the modern country of Djibouti.