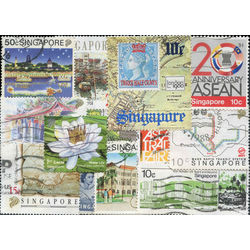 Singapore is an island located off the edge of the Malay Peninsula. This area used to be heavily under British control until gaining its independence in 1965. Today it is a vibrant and modern country considered to be a leader in the financial world. Singapore is also known to have a strict judicial system with severe penalties for crimes such as rape, murder and drug trafficking. The modern postal history of Singapore began in 1948.