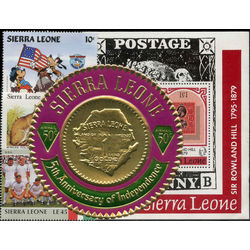 Sierra Leone is a country in western Africa near Guinea and partially bordering the Atlantic Ocean. This country used to be a port for the departure of slaves to the New World and Europe. Once a British colony, Sierra Leone obtained its independence in 1960. The country and its population have lived through civil war and much unrest. Most recently, Sierra Leone has been in the media because of the mining and trade of 'blood diamonds'. Sierra Leone began issuing stamps in 1859.