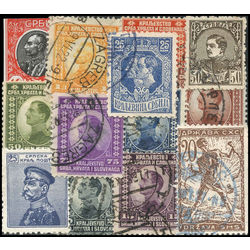 Serbia is now a landlocked country in eastern Europe which used to be Yugoslavia. Serbia began to issue its own stamps in 1866. This country has seen a lot of political turmoil. Under Nazi occupation its stamps were overprinted 'Serbien'. At the end of the Second World War, the region became known as Yugoslavia and issued stamps as such, until 2006, when it re-became Serbia.