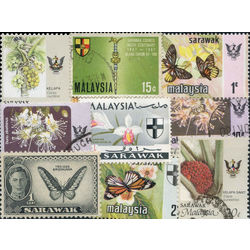 Sarawak is a Malaysian state located on the north-west side of the island of Borneo. It became fully independent in 1963. Sarawak is a cosmopolitan state, made up of many different ethnic groups. As a British protectorate, Sarawak used British stamps. Now, Sarawak uses stamps of the Federation of Malaysia, of which it is a member, overprinted "Sarawak".