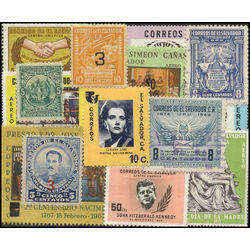 El Salvador is a country in Central America located between Guatemala and Honduras. Once under Spanish rule, El Salvador gained its independence in 1838. The new country started issuing its own stamps in 1867. El Salvador has had a turbulent political history, everything from revolutions to coup d'états. It is also a country at the mercy of its climate. Located along the Pacific Ring of Fire, El Salvador is often in the news for disastrous earthquakes, landslides and volcanic eruptions. The economy of the country relies primarily on the exportation of coffee.