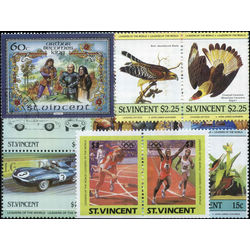 A volcanic island, Saint Vincent is the largest island in the chain called St-Vincent and the Grenadines in the Caribbean. It still has an active volcano named La Soufrière. The island possesses both black and white sand beaches due to the volcanic soil. A lush paradise of tropical gardens and rainforests awaits the visitor; the brave can even hike up to the top La Soufrière and view the active lava dome. Once a British colony, it gained independence in 1979. The postal history of St. Vincent began in 1861.