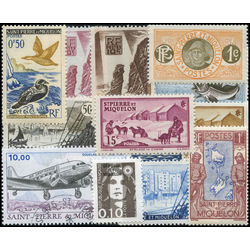 Saint Pierre & Miquelon is a group of islands in the North Atlantic Ocean, south of Newfoundland, which are a French possession. The fishing industry used to be a strong part of the economy, especially cod fishing, but in modern times this industry has seen a decline. For a short time, during American prohibition, the islands saw a boom in their economy by being used as a base for alcohol smuggling. Saint Pierre & Miquelon began issuing stamps in 1885.