HAPPY VALENTINE'S DAY!
CLICK HERE for a BIG DISCOUNT!
Use the coupon CUPID to save 10% on any order !
* Enter this code during checkout, valid through 2023/02/14.
FREE SHIPPING
available at $89
World Stamps & Collections /
World Stamp Packets /
Countries in S
Back 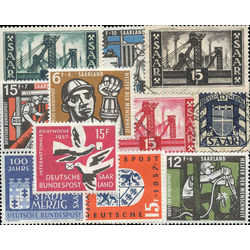 Saar is a border region located between France and Germany. The ownership of the region has been heavily contested throughout the years especially during the First and Second World Wars. At different times it was once a German and then French protectorate. Saar as a state is now a part of Germany. Each protectorate issued stamps during its occupation, until finally using stamps issued by Germany when it became a part of that country. This region plays a vital role in Germany's economy.