HAPPY VALENTINE'S DAY!
CLICK HERE for a BIG DISCOUNT!
Use the coupon CUPID to save 10% on any order !
* Enter this code during checkout, valid through 2023/02/14.
FREE SHIPPING
available at $89
World Stamps & Collections /
World Stamp Packets /
Countries in R
Back 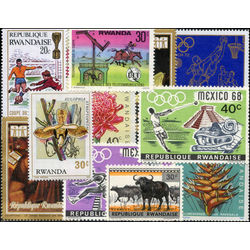 Rwanda is an African nation located on the eastern side of the continent near Uganda and Burundi. Once a Belgian colony, Rwanda obtained its independence in 1962. Tragically, one of the reasons why this country is so well known is because of the much publicized genocide which occurred there in 1994. Reports indicate the amount of victims of that massacre at between 500, 000 to 1 million. Sometimes called the 'Switzerland of Africa', Rwanda is also a lush, green country of rolling hills and mountains which are home to mountain gorillas. It has been stated that at one time, for every tree cut down two more were planted. The first stamps of modern Rwanda were issued in 1962.