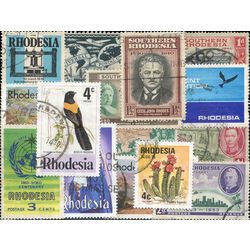 Rhodesia was a country in southern Africa bordered by Botswana, Zambia and Mozambique. It is now known as Zimbabwe. Formerly a British colonly, the state of Rhodesia existed from 1965-1979, but was not recognized as a nation by everyone, least of all the British. The political history of this region is complicated enough, let alone its stamp issuing history. For a brief time, from 1954-1963, while the area was known as the Federation of Rhodesia and Nyasaland, it issued stamps inscribed 'Rhodesia & Nyasaland'. After becoming an independent state, stamps were issued by Rhodesia from 1965-1980.