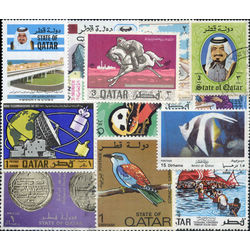 The State of Qatar is an Arab emirate located on the Arabian Peninsula. It was formerly a British protectorate but gained independence in 1971. Always prosperous economically, in the past it was known for pearling but is now a major player in the oil and gas industry. Qatar used British Agency stamps overprinted 'Qatar' until 1963 ; in that year, Qatar set up its own postal agency. The independence of the nation was commemorated in 1971 on a set of stamps.