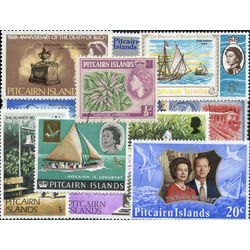 The Pitcairn Islands is the name of a group of four islands in the South Pacific Ocean which are still a British overseas territory. As of 2009, there were only about 45 inhabitants left on the main island of Pitcairn. One of their claims to fame: it is here that the survivors of the mutiny of the ship 'Bounty' finally settled. The wreck of the ship can still be seen in the waters of Bounty Bay. Mail used to be hand stamped 'Posted on Pitcairn Island: no stamps available'. Eventually, the first stamps of Pitcairn were issued in 1940. Another interesting tidbit: the sale of stamps is a major source of revenue for the population and the Pitcairn Islands exports almost nothing else.