👑 Welcoming His Majesty King Charles III! 👑
CLICK HERE to SAVE with our COUPON!
Use coupon CharlesIII* to save 5% on any order!
*Enter this code during checkout, valid through 2022/09/30.
FREE SHIPPING
available at $89
World Stamps & Collections /
World Stamp Packets /
Countries in P
Back 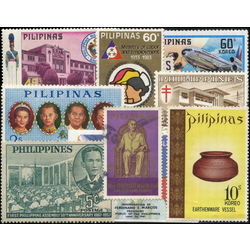 The Philippines is a country in Southeast Asia located in the Pacific Ocean. It is an archipelago of more than 7000 islands situated in what is known as the 'Pacific Ring of Fire', a region of active and dormant volcanoes. Its position and tropical climate makes it prone to severe weather conditions such as earthquakes and typhoons. The Philippines was a Spanish colony until 1898, the year that it declared its independence. Unfortunately, the Philippine-American war broke out when the USA would not recognize its independence (the United States had purchased the Philippines from Spain for $20 million). A long history of occupations continued until the Philippines officially retained its independence in 1946. The Philippines possesses a high biodiversity and many endemic species. An interesting thing to see in the Philippines: the colourful 'jeepneys' which cross the country. Leftover US military jeeps were converted into public transportation at the end of the Second World War. Stripped down and decorated with ormanents and bright colours, they provide an eye-popping attraction for tourists and natives alike. The Philippine Postal Service was established in 1898.