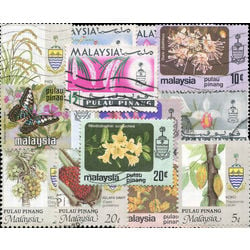 Penang is a Malaysian state composed of Penang Island and a province on the Malay Peninsula. Though the British tried to maintain their control over the area, Penang became independent and joined the rest of Malaysia in 1963 as a member state. Penang is an industrialized region and a growing tourist destination. Penang used stamps of Britain before independence and then stamps of Malaysia beginning in 1957.