HAPPY VALENTINE'S DAY!
CLICK HERE for a BIG DISCOUNT!
Use the coupon CUPID to save 10% on any order !
* Enter this code during checkout, valid through 2023/02/14.
FREE SHIPPING
available at $89
World Stamps & Collections /
World Stamp Packets /
Countries in P
Back 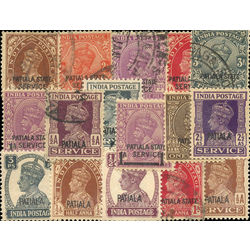 Patiala was once a princely state of India and one of the wealthiest. Now the region is part of the Punjab state of modern-day India. Patiala was a convention state during the control of British India. In other words, it had an agreement to use the stamps of British India overprinted 'Patiala'. These stamps were used from 1884-1947; when India declared independence all areas used stamps of the Republic of India.