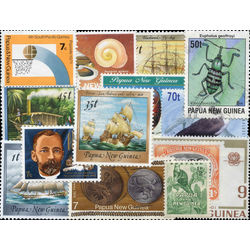 Papua New Guinea is a nation made up of the eastern portion of the island of New Guinea and several outlying islands. All of these are located in the South Pacific Ocean off the continent of Australia. After the Second World War, Papua New Guinea came under the control of Australia until it attained its independence in 1975. Some interesting species live in this area of the world such as the bird of paradise and Queen Alexandra's Birdwing-the largest butterfly in the world. This amazing butterfly has a wingspan which can reach 11-12 inches! The region used stamps of Australia from 1945-1953; from 1953-1972 stamps bore the mention 'Territory of Papua and New Guinea'; beginning in 1972 stamps were issued 'Papua New Guinea'.