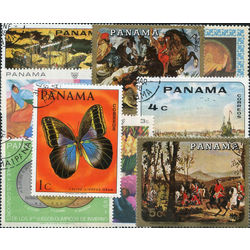 Panama is an S-shaped, narrow country in southern Central America which links North and South America together. The area was explored by Columbus and eventually became a colony of Spain. Its narrowest point is the location of the Panama Canal, which ties the Atlantic and Pacific Oceans together and is a strategic trade route and waterway. Panama declared its independence from Spain in 1821. The newly independent country allowed the United States to dig the canal and control it, a policy which has caused much contention in recent years and even led to a war between the two nations in 1989. Panama is beautiful and home to many plant and animal species. The famous 'Panama Hat' (actually of Ecuadorian origin), is a white, straw hat made famous when President Teddy Roosevelt wore it while touring the Canal. The postal history of Panama began in 1878, but it was only in 1906 that stamps were issued by the official Panamanian post office.