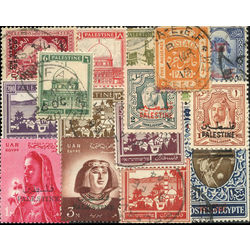 Palestine is generally used to refer to certain areas within modern Israel which are under Palestinian (or Arab) authority, although this rule is still contested occasionally and boundaries are constantly changing. This region has been under various postal administrations depending on the occupying force of the day. Since 1948, the year that Israel was accorded status as a nation, stamps have been issued by the Palestinian National Authority for the areas under its control.