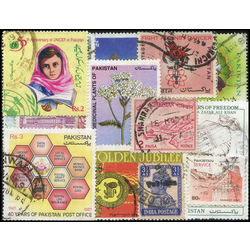 Pakistan is a country located near Afghanistan, India and China. The country was created when two mostly Muslim populated areas separated from India to form their own nation in 1947, the same year that India declared its independence from the British. As is often the case in such political situations, the separation was not peaceful and continues to cause controversy to this day. The country is predominantly agricultural with many artisans skilled in leather-works, metal-works and the weaving of rugs and carpets. The postal history of Pakistan as an independent nation began in 1947. However, during those first few years, the country used the stamps and policies of British India since the new government was too busy setting up shop to have time to establish new postal agencies, designs or regulations.