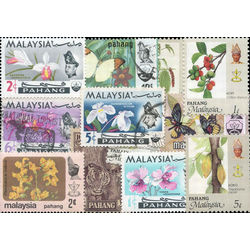 Pahang is a state in Malaysia that was ruled by a sultan for a time until it came under the control of the British. Eventually, in 1963, the area became known as the Federation of Malaysia. Pahang is covered by rainforest and is home to many endangered animals. The postal history of Pahang began in 1889 under British rule and continued its own postal services even after joining Malaysia. Pahang was one of many states allowed to issue its own stamps even as part of the Federation.