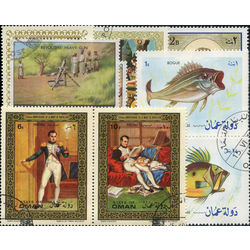 Oman is state located on the coast of the Arabian Peninsula bordered by the UAE, Saudi Arabia and Yemen. The area was occupied by Portugal for a time, but they were eventually thrown out and the area came under independent rule by sultans. However, these sultans relied heavily on a good relationship with Great Britain. Ever since ancient times Oman has prospered in trade due to an advantageous location on the Indian Ocean. The postal history of Oman began in 1971.OMAN - Scott unlisted issues