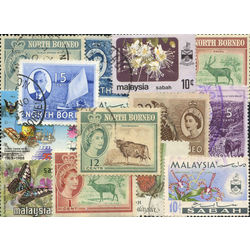 Borneo is a large island separated from the Malay Peninsula by the South China Sea. Sabah is a territory located on this island. The northern part of Borneo and the region of Sabah were both British protectorates and then colonies. This area is now known as the state of Sabah, East Malaysia. The region of North Borneo and Sabah used to use stamps of the Straits Settlements. Then, in 1883, stamps were issued inscribed 'North Borneo'. This lasted until 1963, when the area merged with the Federation of Malaysia.