👑 Welcoming His Majesty King Charles III! 👑
CLICK HERE to SAVE with our COUPON!
Use coupon CharlesIII* to save 5% on any order!
*Enter this code during checkout, valid through 2022/09/30.
FREE SHIPPING
available at $89
World Stamps & Collections /
World Stamp Packets /
Countries in N
Back 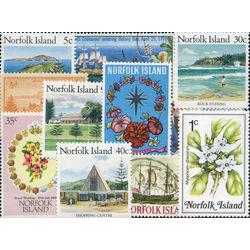 Norfolk Island is a small island located between Australia, New Zealand and New Caledonia in the South Pacific Ocean. It is part of the Commonwealth of Australia, but is largely self-governing. The first inhabitants of the island were Polynesians, but they eventually disappeared from it. Norfolk Island was once used by the British as a penal colony due to its remote location. The island became known for its harsh treatment of the worst criminals and was nicknamed 'Isle of Mis'ry'. Things have changed with time, and now one tourist brochure claims Norfolk Island is, "the friendliest, most idyllic, historic, beautiful, relaxing, safe, tempting, unspoilt, sporting, unique holiday address in the world". Norfolk Island began its own independent postal history in June, 1947.