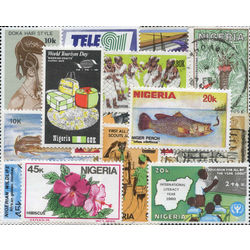 Nigeria is a country in western Africa which borders Benin, Chad, Niger and the Atlantic Ocean. The Spanish and Portuguese were the first Europeans to trade with the region and one of the trade items was slaves. Nigeria became a British protectorate in 1901 until it gained independence in 1960. The country is home to many diverse ethnic groups speaking over 250 different languages. The Yoruba tribe also speak 'the language of the drums'. Drums are used to beat out messages which can be heard over short distances. As a part of the British colonies, stamps were being issued in Nigeria as far back as 1914.