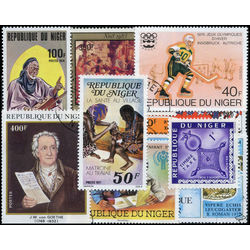 Niger is a landlocked western African country near Benin and Burkina Faso. The territory which is now considered Niger used to be divided up between several other states which were a part of French West Africa. Niger gained full independence in 1960. Most of the country is located within the Sahara desert. These geographical conditions make it most difficult for its population to survive. Most live from day to day. The region used to use the stamps of French West Africa. The first postage stamps of the Niger Republic were issued in 1959.