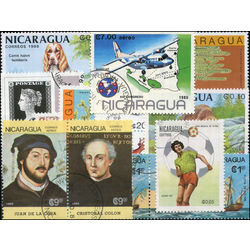 Nicaragua is a country located in Central America which borders Honduras, Costa rica and the Pacific Ocean. The first inhabitants of the land were indigenous peoples, however, with the arrival of Christopher Columbus Nicaragua eventually became a Spanish settlement. It gained its independence in 1821. Nicaragua is considered a 'biodiversity hotspot' and this is contributing to its growing attraction as a tourist destination. Most of its population earn their living through agricultural means; a popular crop is coffee. Nicaragua began issuing its own stamps in 1862.