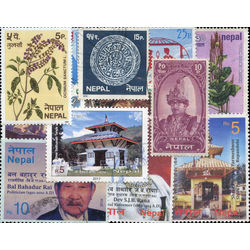 Nepal is a landlocked country in southern Asia. It is located in the Himalayan mountains and borders China and India. Mount Everest is located in Nepal. The capital of this nation is the popularly known city of Kathmandu. Nepal has often been called the 'Valley of the Gods' because of the number of religious temples and shrines located there, and due to the importance religion plays in the day to day life of the people. Officially, Nepal is a Hindu state. Nepal has a postal service dating back to 1875, with runners carrying official mail. Later, this service was opened up to the public. However, its first postage stamps were only issued in 1881.