HAPPY VALENTINE'S DAY!
CLICK HERE for a BIG DISCOUNT!
Use the coupon CUPID to save 10% on any order !
* Enter this code during checkout, valid through 2023/02/14.
FREE SHIPPING
available at $89
World Stamps & Collections /
World Stamp Packets /
Countries in N
Back 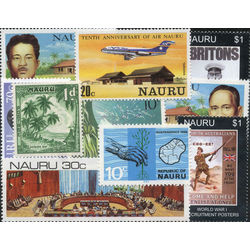 Nauru is an island nation in Micronesia in the South Pacific Ocean. It is located half-way between Hawaii and Australia. The first European to visit Nauru was a British sea captain who named it 'Pleasant Island' due to the incredible tropical beauty of the area. Nauru has issued postage stamps since 1916 under British administration, but in 1968 declared its independence and issued its own stamps. Nauru's inhabitants were once the richest in the world, per capita, due to the phosphate mining on the island. However, strip mining has wrecked the environment and rendered most of the island uninhabitable.